Analysis (here) has shown how highly experienced worker rather live in cultural, lively places than in cities without cultural happening, even if that means to work for a lower salary. “Skilled workers sacrifice higher salaries to live in places with vibrant cultural scenes.” – (Nesta, p.2)

Despite that, it was proven that the link between salaries and cultural capitals has a reverse effect on professionals working in creative industries. Most of them are receiving a substantially bigger wage. The reason because of that might be the expertises in cultural areas of industry, who transform creative industry in the profitable commercial economy.

Cultural sectors plays an important role when it comes to innovation, competition and economic growth of a city. This kind of sector makes a city more lively by developing creative projects that attracts tourists, new talents and other skilled workers. Furthermore, it is also beneficial for city identity, and citizens’ fulfillment.

Provided that, economists identify how individuals take under the consideration many factors before they decide to settle down. Among those factors are not just economics, such as house prices, wages, labour demand, but also other characteristics which will have an impact on their quality of life, for instance weather, crime etc.

“– in other words, individuals will be willing to sacrifice higher wages (or be willing to pay higher housing costs) for the opportunity to live in locations with a rich and varied arts and cultural offer.”– (Nesta, p.6)

Yet,  it was discovered how arts and culture has a positive effect on local productivity, which does not only influence higher wages, but also the following:

a) Investment in creative human capital – individuals, driven by innovations, the one that can reform employers effectiveness outside of the arts Arts and Cultural sectors

Another key point is Florida’s explanation how creative individuals from “creative class” are attracted to cities with Arts and Cultural clusters. Over time, those individuals are the one that contribute the most to urban innovation and growth of a city with their skill sets. In addition, it is evident that workers from those creative classes in metropolitans, that offer big amount of artistic and cultural clustering do “…enjoy a wage premium.” (Nesta, p.26). This being said, there is a potential that the Arts and Cultural sectors, which originate on non-profit base, can be transformed into the commercial creative industries by adding a innovation into their economic model. 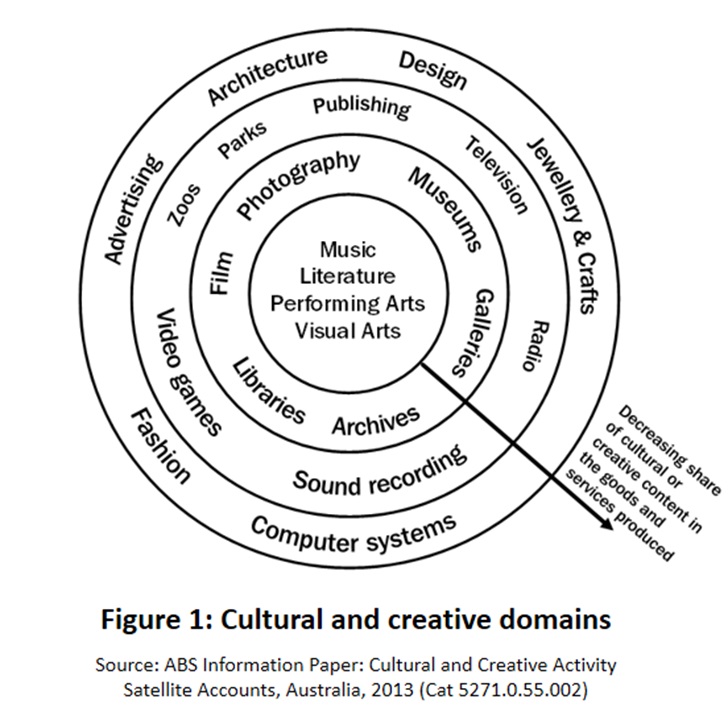 Davide Throsby designed the model of the creative economy “Concentric circles”, which shows that arts and cultural sectors (music, literature, performing arts, visual arts) are the foundation of the creative value chain. Those sectors than in a way commercialise other creative industries by provoking expressive values, which can then lead to further development of the economy through ‘creative innovation services’ and establish other creative content such as design, architecture, fashion and others.

Few studies have shown how the role of the Arts and Culture within the Creative cities as sources of spillovers links between Arts and Cultural clusters and urban economic performance in terms of income and wages.

“Think, for example, of a web designer who uses the visual language of a painter exhibiting at a local arts gallery in her redesign of the website for a local client, an ad agency that uses the ‘cultural capital’ generated by local artists to produce a campaign for a client in the automobile industry (as related by Adam Arvidsson), or cultural districts which attract innovative media arts entrepreneurs.”- (Nesta, p.23)

To sum it up, the culture of a city should be more than just a source of jobs and income. Instead, it should be a place, with a taste of belongings and confidence. Only with that kind of a structure of a city we can help to generate economic growth with a sense of pride and purpose.

Capitals nowadays are centres that attracts varied audience and represents home to the most creative minds of cultural businesses. Such cities attract newcomers and are starting areas where ideas coming together. They are places, where knowledge and ideas are created and shared. Nevertheless, they represent great meeting points for people, who exchange experience and skill sets.

Most of the creative cities are also the educational cities. Universities represents venues for cultural entrepreneurs, who are capable of creating impressive schemes with small resources and a culture of creativity that can create value in many innovative ways.

At the same time, manufactures, factories, warehouses are abandoned, therefore more of them should be transformed into cultural inspirations, that would build new cultural image.

As an illustration,  a nice case of this approach is Tate Modern, which was built on the former power station and was transformed into the gallery. This shows how some practical steps in business, that is based on creative economy can help cities to bloom its potential that is going to be seen  for a long-run. For that reason creative industries are vital in order to bring quality lifestyle to a citizen in a capital, not only for providing that citizen a job in it, but also to help communities to build social capital, which will than also give a better way of sustaining themselves. This is why we should create a city with a purpose. (Leadbeater, 1997)

How about you, would you prefer to live in an arts/culture area knowing you would have a lower wage? Why? What is more important for you: your wage or living in the city? What factor would influence your wage?

https://www.demos.co.uk, The rise of the social entrepreneur by Charles Leadbeater